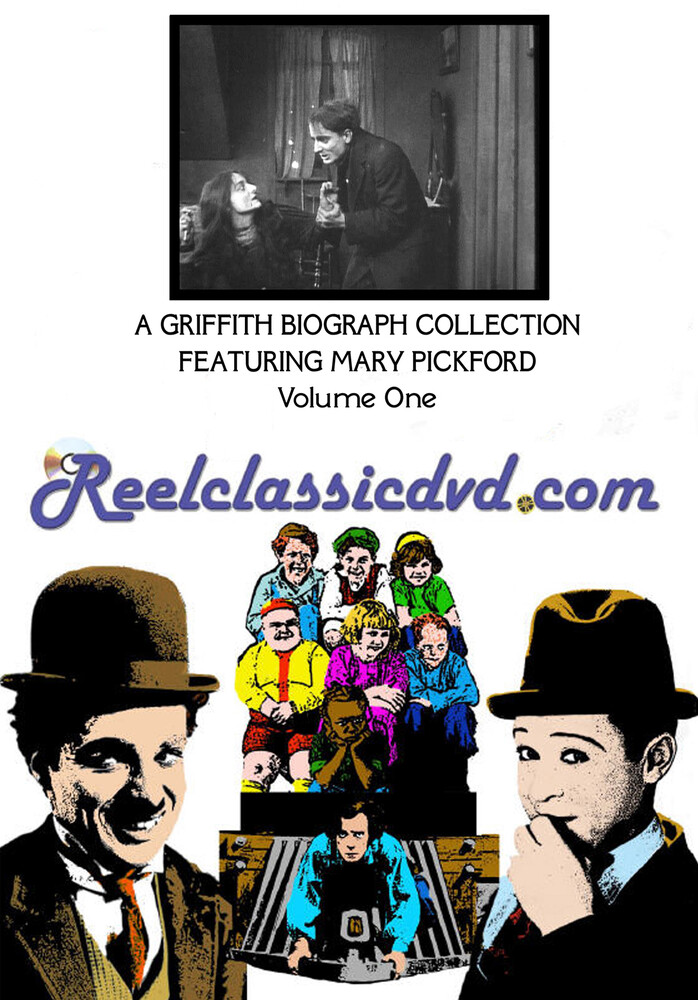 A GRIFFITH BIOGRAPH COLLECTION FEATURING MARY PICKFORD Volume One Here is the first volume of 12 great films directed by D.W. Griffith from 1909 to 1913, considered by many to be his most creative period. Covering a wide range of topics, these short gems present us with everything from lessons in morality to young women in mortal danger! WHAT DRINK DID (1909) starring Florence Lawrence and David Miles. Directed by D.W. Griffith. This is a powerful Griffith preachment against the evils of drink and it's destruction of a young family. Mary Pickford appears as an extra in one of her very first films. AS IT IS IN LIFE (1910) starring George Nichols, Mary Pickford and Charles West. Directed by D.W. Griffith. A widower sacrifices love and his vitality to support his young daughter and send her to a fine school. Upon her return, she vows never to leave her poor father who has given up so much for her. But when a young man suddenly enters her life, her father is in danger of being completely forgotten. AN ARCADIAN MAID (1910) starring Mary Pickford, Mack Sennett, George Nichols and Kate Bruce. Directed by D.W. Griffith. When a slick salesman from the city arrives in town, a poor country girl finds herself completely smitten by his charms and big city ways. It isn't long before he convinces the poor girl that he intends to marry her. He also convinces her to steal her employer's life savings so he can pay off his gambling debts. THE HOUSE WITH CLOSED SHUTTERS (1910) starring Henry B. Walthall, Dorothy West and Grace Henderson. Directed by D.W. Griffith. A young man joins the Southern army during the American Civil War and is the heroic pride of his adoring mother and sister. On the battlefield, however, it soon becomes obvious that he is actually a drunkard and a coward. Trusted to deliver an important dispatch, he flees instead to his home in a drunken stupor. It is up to his sister to disguise herself in her brother's uniform and go to war to save the family's honor! WILFUL PEGGY (1910) starring Mary Pickford, Henry B. Walthall and Clara T. Bracy. Directed by D.W. Griffith. A high born Lord takes a fancy to young Peggy and decides to have the headstrong girl for his bride. Peggy, however, has a lot to learn about proper manners and behavior in polite society. Deciding to abandon the marriage, she disguises herself as a man and flees with her husband's nephew. FOR HIS SON (1912) starring Charles Hill Mailes, Charles West and Dorothy Bernard. Directed by D.W. Griffith. The good doctor is an honest, hard working man, but he never seems to have enough money to satisfy his greedy son. He comes up with a money making scheme to market a soft drink laced with cocaine! His plan works and he soon has plenty of money, but at the cost of his son becoming a hopeless drug fiend
back to top