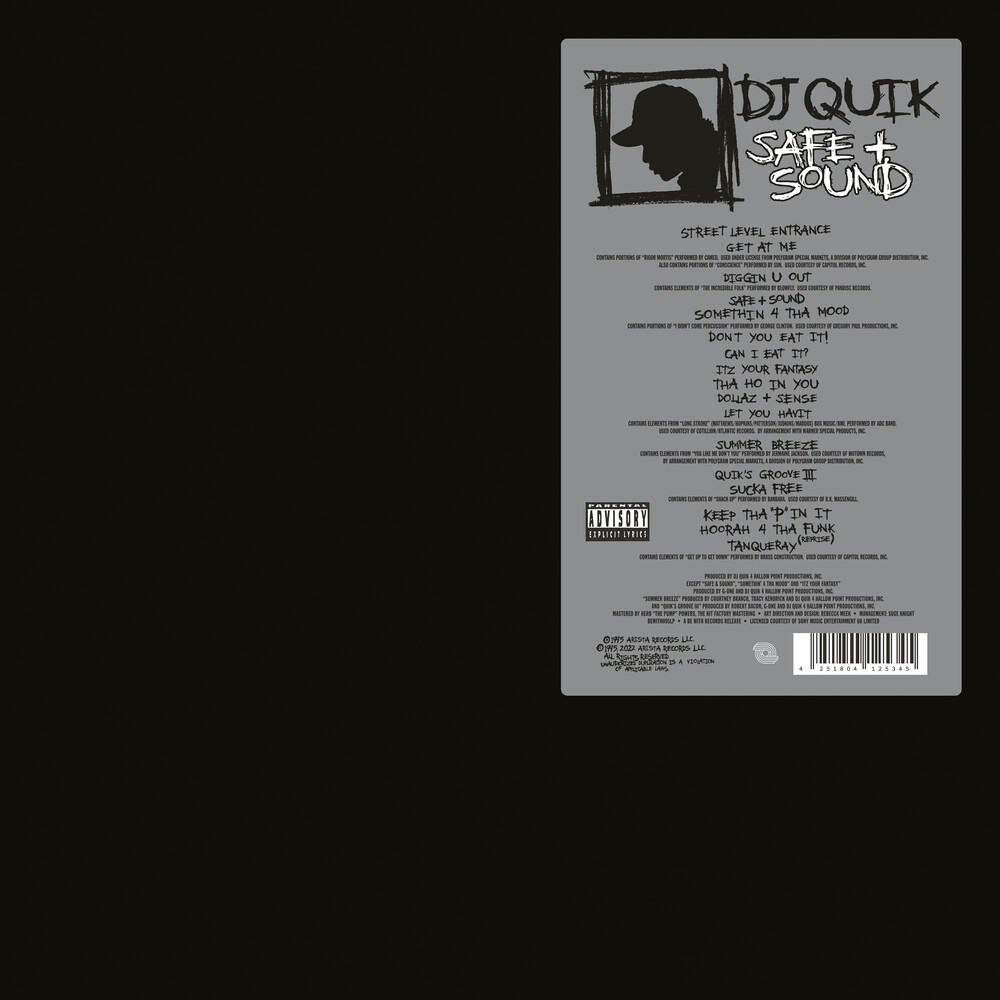 DJ Quik is a giant of West Coast hip-hop. With 1995's Safe + Sound, he scaled new levels of musical magnificence with his signature new age P-Funk/laconic G-Funk. A quintessential, sun-scorched LA album, this is pretty much essential. Typical for mid-90s albums the original vinyl copies are now rare so here's the Be With re-issue, complete with "Tanqueray", the hidden track from the original CD release.A preternaturally gifted producer/rapper, DJ Quik has produced scores of LA gangsta rap classics. He's released platinum and gold records of his own, as well as helped craft them for the likes of Tupac, Snoop Dogg, and Dr Dre. Quik has always been quirkier and more interesting than his gangsta rap peers, both musically and lyrically. An old-school funk producer at heart, he's also incredibly nice on the mic. His raps often deal in boasts, jokes and good times but also cover his beefs, his trials and his trauma. Partying and pain, all mixed up. DJing and producing hype beat tapes from age 14, Quik's tracks blended the languid funk and rubbery synths of Zapp and George Clinton with a gangsta aesthetic, creating a more danceable foil to Compton's more typical nihilistic hedonism. Ultimately, his records sound custom engineered to drift out over sun-soaked barbecues.By the time of his third album DJ Quik was a household name on the West Coast - California's premier rapper/producer not named Andre Young. Released on Profile in 1995, Safe + Sound was certified gold. Less reliant on samples and more focused on live instruments, it elevated him from producer to fully-fledged composer. This sound - the quick, winding basslines, tinny high hats, smooth instrumental solos, soulful pipes, and Roger Troutman's talkbox - defined him. This is an album of full-blown masterpieces. Rich soundscapes and masterfully arranged orchestrations with dense layers of sounds, intricate rhythms, and well-balanced songwriting.The first track proper, "Get At Me" samples Cameo whilst Quik takes aim at the Judases in his life, the horn-laced chorus providing a triumphant feel. On the horizontal "Diggin' U Out", the soulful electric piano of Warryn Campbell lays a relaxed groove for Quik to talk over about one of his favourite topics: sex. Title track "Safe + Sound" chronicles Quik's formative years over a slick instrumental. The moody bass locks a laidback infectious groove, the hook is catchy and Quik's delivery is in fine form. On the uber-chilled "Somethin' 4 Tha Mood", Quik cooks up a breezy, feel good track of sparkly keyboards, syncopated claps, shuffling hi-hats, woozy synths and a floating two-minute flute solo courtesy of Robert "Fonksta" Bacon. Analysing the highs and lows of an average day in the hood, it echoes Cube's "It Was a Good Day"."It'z Your Fantasy" is a silky smooth soundtrack to Quik's detailed retelling of a sexcapade with a young lady and whilst "Tha Ho In You" is musically perfect for that midsummer family BBQ, it's lyrical content is unsurprisingly decidedly less family-friendly. A real highlight, the infamous "Dollaz + Sense" is one of the most ruthless diss tracks of all time. The brutal lyrics ride a laidback West Coast beat, flipping a sample from Young & Company's "I Like (What You're Doing To Me)" as Quik fires lyrical shots at his arch Compton nemesis, MC Eiht. On the loping, hazy "Let You Havit", Quik is again in gangsta mode, with more bars of barbs aimed at Eiht, rhyming over sun-kissed synthy-rollerskate funk.Some of the finest tracks on Safe + Sound are those designed to de-stress. The evocative "Summer Breeze" is a classic warm-weather jam, anchored by a twangy funk guitar, breezy string arrangement, and a soulful hook delivered by Dionne Knighton. Quik's nostalgic lyrics are not far from DJ Jazzy Jeff & The Fresh Prince's "Summertime", reminiscing over barbecues at the park, young love, and the brevity of halcyon youth. The relaxed and jazzy "Quik's Groove III" is another highlight, as bass, guitar, piano and flute combine to create a smooth, soulful instrumental.The swaggering "Shack Up"-sampling "Sucka Free" features a cameo from Playa Hamm, all funky braggadocio and over much too quikly (pun thoroughly intended). The jazz-flavoured "Keep Tha 'P' In It", again featuring Playa Hamm but this time extending the cameo invitations to Hi-C, 2nd II None and Kam, is pure laidback P-Funk. The deep bass and industrial drums make sure the groove hits hard."Tanqueray" was originally a hidden track on the CD version of the album, but it's too good to hide. This wild party samples Brass Construction's gigantic "Get Up To Get Down" and soars in it's drunk-ebullience. An apt way to close this party-driven set.This 2022 Be With double LP re-issue has been mastered for vinyl by Simon Francis, cut by Pete Norman and pressed at Record Industry. Unusual for the time, Safe + Sound was originally pressed as a double, so all that was missing was the CD's hidden bonus track "Tanqueray", so we've fixed that. The original vinyl release never got a picture sleeve, so we've recreated the original's promo-style silver-sticker and plain black jacket. A subtle cover for a wonderfully unsubtle record.
This website uses cookies to personalize content and analyse traffic in order to offer you a better experience.
I accept Learn More
back to top